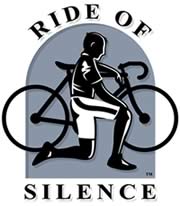 Ride of Silence events are held every year on May 18 at 7:00 PM in hundred of locations world wide.The first Ride of Silence took place at White Rock Lake in Dallas in 2003. This unformal event, attended by 1000 cyclists, was organized by Chris Phelan to honor the memory of his friend Larry Schwartz who was killed by a school bus mirror on May 4 2003.

The mission of the world wide Ride of Silence is to honor bicyclists killed by motorists, promote sharing the road, and provide awareness of bicycling safety.

For more information go to http://www.rideofsilence.org.

We had wonderful support from Cleveland Police as well as a number of other police departments along the route. It was an uplifting and inspirational event that included speakers who talked about the growth of bicycling for transportation and the need for all road users to respect each other and share our roadways.

Speakers also included Bob who has rebuilt his life after being partially paralyzed in a crash, Alex who read a statement from the parents of Sylvia who was killed by a right-turning truck and Gary who talked about his co-worker Charles who was killed while commuting to work.

This event has helped galvanize and strengthen the budding bicycle advocacy movement in northeast Ohio.

Photos From Rides of Silence in Cleveland

Photos From Other Rides of Silence by Friends and Family Members

“I translated and transcribed videos of Holocaust survivors, to ensure that such stories are permanently recorded and remembered. I worked as a volunteer and an employee for sustainable agriculture and ethical eating.”
— Sylvia’s AmeriCorps Application, June 2009