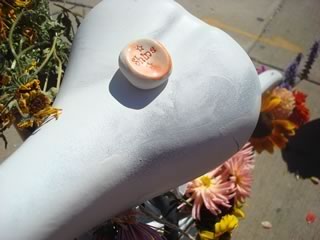 A truck mowed down Sylvia Bingham in September, killing her as she rode her bicyle on Prospect Avenue headed to work at the offices of Hard Hatted Women, Inc.

The Yale graduate’s ghost bike, though, lives on.

The white bike propped on the corner of Prospect Avenue and East 21st Street is still decorated with flowers and a number of bicycle helmets. (Though she was a proponent of helmets, Bingham was not wearing hers at the time of her death.)

Jim Sheehan of the Ohio City Bicycle Co-op, which put up the memorial, said people regularly add helmets, turning the memorial into a sort of public art display. The helmets, he said, can be taken by those who need them, in keeping with Bingham’s giving spirit.

But helmets aren’t the only issue. Bingham’s family has established a fund in the name of their daughter, a California native in Cleveland for a yearlong stint as an Americorps Vista volunteer, to demand the right for people to bike safely and to educate people about how to share the road.

The driver who hit Bingham, Herschel Roberts, has been charged with aggravated vehicular homicide and driving while under the influence.

“As a sociology student, I have sought to understand the systemic causes, whether economic, political or social, of inequality.”
— Sylvia’s AmeriCorps Application, June 2009