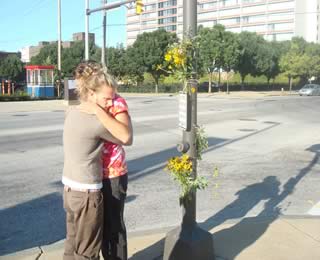 CLEVELAND — A recent college graduate who just moved to the Cleveland area three weeks ago was killed Tuesday after being struck while riding her bike downtown.

Sylvia Bingham, 22, was riding her bike across East 21st Street down Prospect Avenue when she was hit by a truck.

Police said Bingham was on her way to work when she was struck near Cleveland State University’s Wolstein Center.

She was rushed to St. Vincent Charity Hospital, where she died at 9:10 a.m.

Police said the driver of the truck took off, but police found and questioned him Tuesday afternoon.

Bingham, a native of California, moved to Cleveland to volunteer with Americorps Vista. She was donating a year of her life to help women climb out of poverty.

“This is a young woman with many choices, but with close friends here, she chose Cleveland and she wanted to make a difference for a year,” said Burgess Sandu.

Bingham recently told her boss how much she liked Cleveland.

“We just talked yesterday about what she liked about Cleveland, and the lake and the things we take for granted. She talked about the cost of living and how much she liked her apartment and other Vista member,” said Burgess Sandu.

In her resume, Bingham wrote that she was dedicated to imagining and creating a better world.

Police said Bingham was not wearing a helmet.

No charges have been filed at this time against the driver of the truck, who works for a local electric company, but the investigation continues.